Galleries > The Story of the Deer in the Road 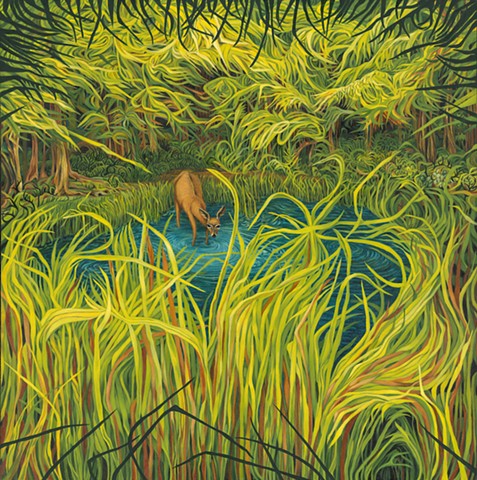 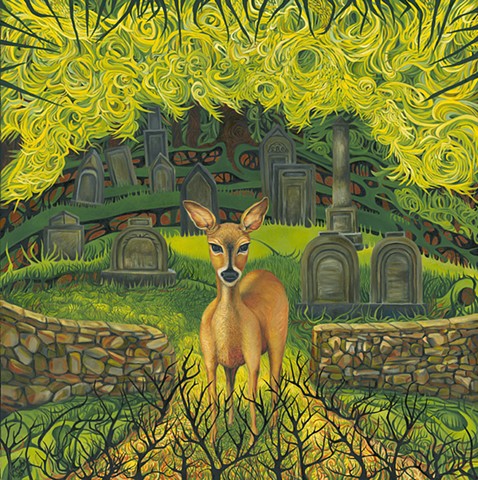 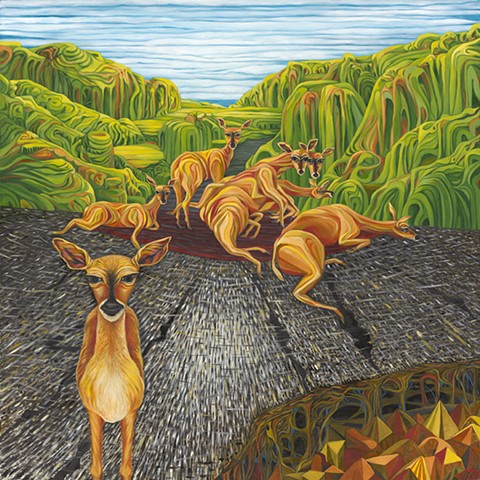 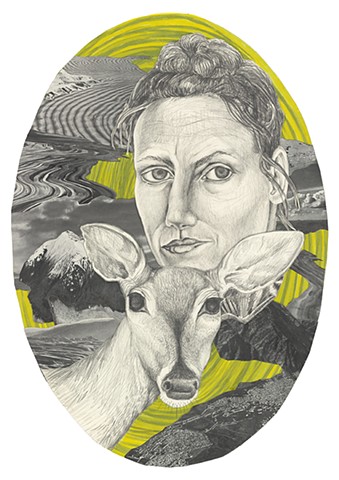 Portrait of the Artist and Her Muse
watercolor, colored pencil, graphite and collage on paper
23 x 17.25", including frame
$1700 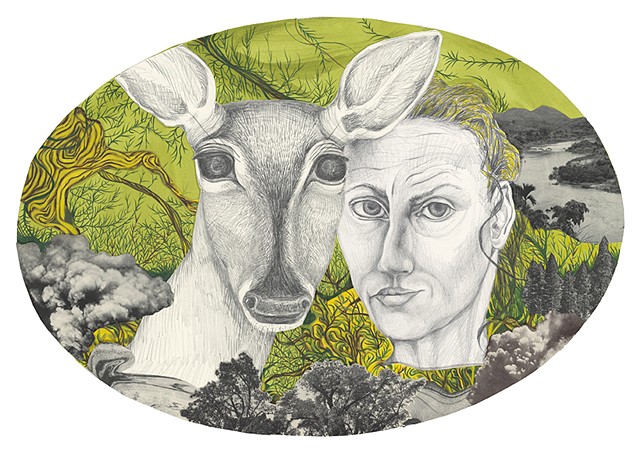 Landscape: Portrait of the Artist and Her Muse
watercolor, colored pencil, graphite and collage on paper
17.25 x 23", including frame
$1700 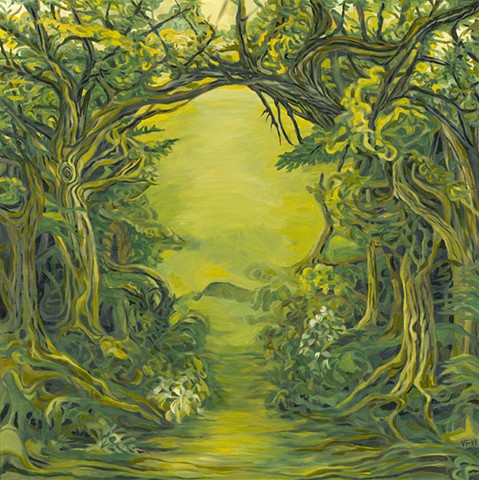 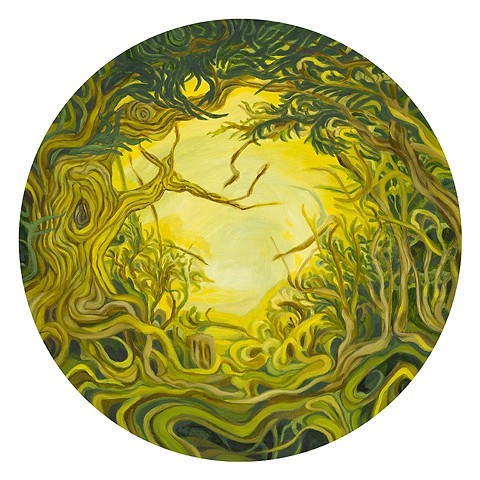 Portal to the Meadow
oil on maple panel
12" round 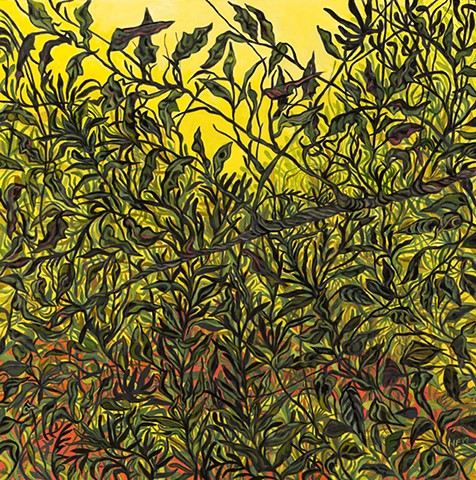 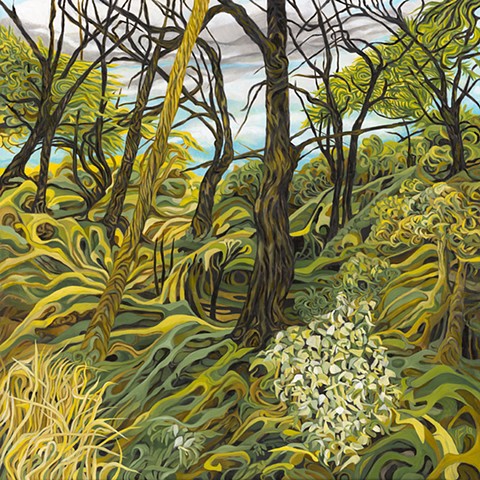 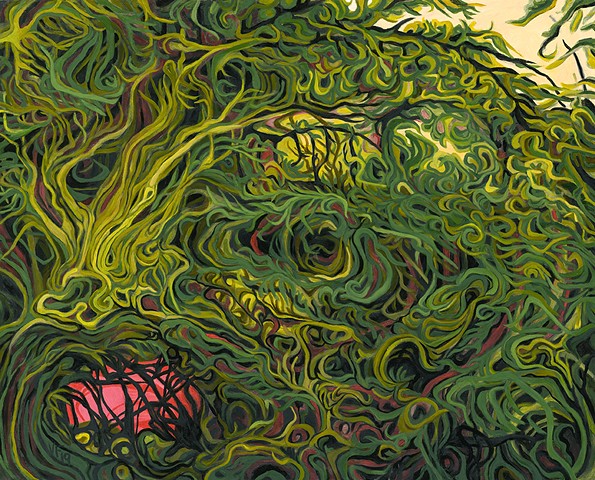 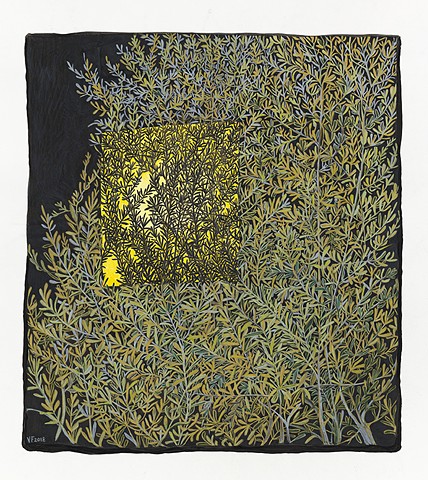 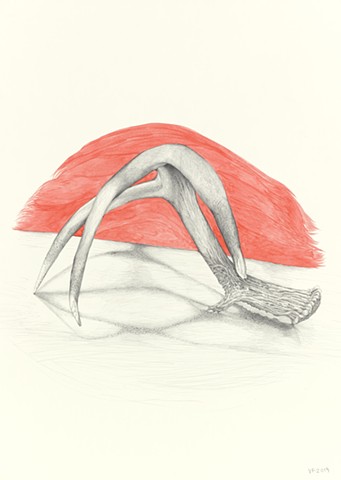 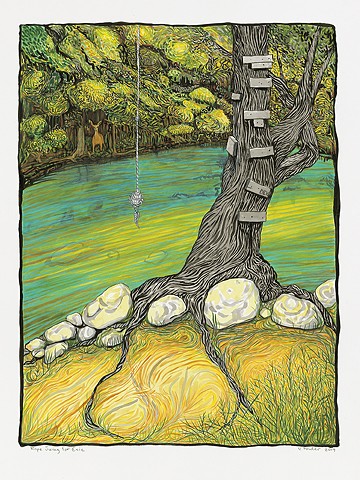 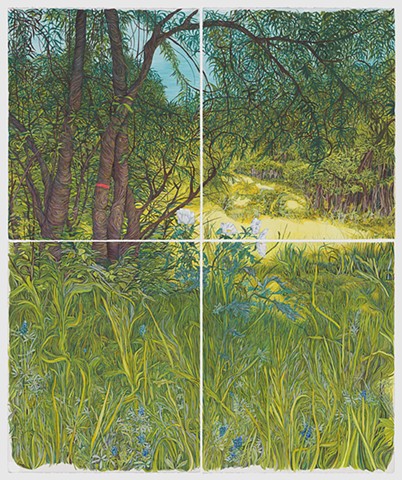 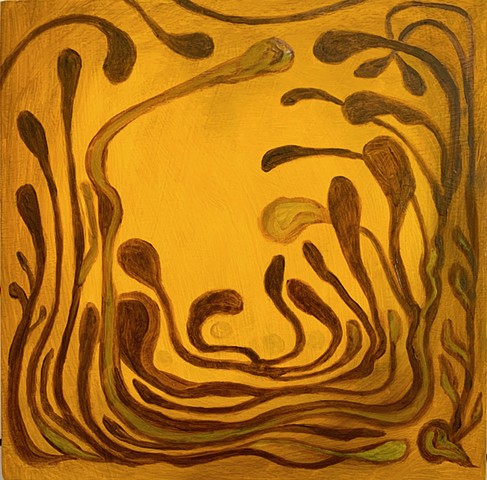 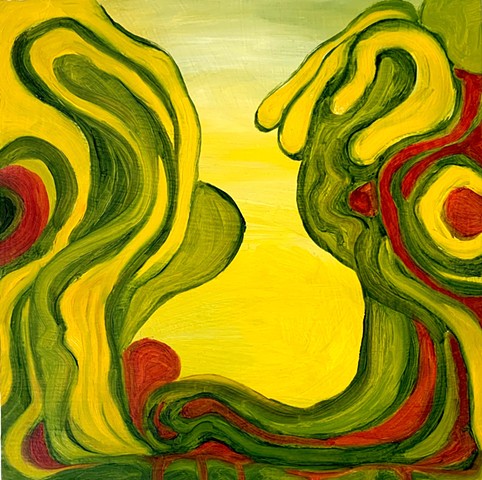 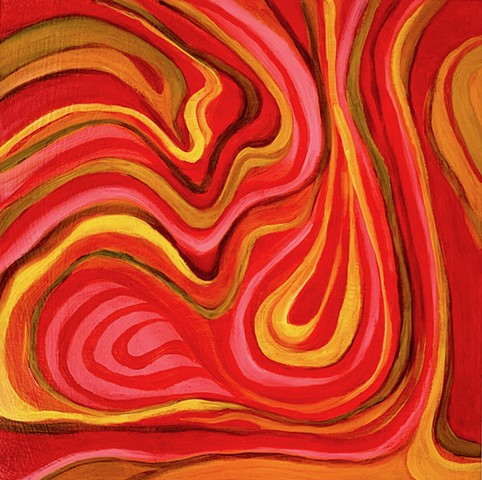 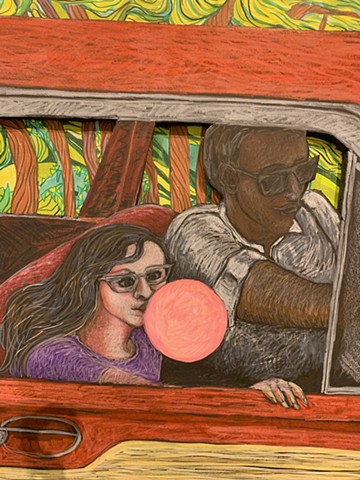 The Story of the Deer in the Road
film

Here is a little of the backstory for this body of work: I came to it in a specific way. Normally my artwork inspirations come to me and are carried out in a catch-and-release, or absorb-and-exploit, sort of way. I’m lucky to have a fairly steady stream of ideas to react to or let fall to the wayside. I’m happy to be led by the nose, following one muse until I …follow another. But this show, The Story of the Deer in the Road, is different. It’s been pursuing me since my father died, nine years ago. The germ of the show was sparked by a nasty traffic accident. On an October day In 2010, I was driving to Wimberley to sit with my dad, who was in hospice care, dying in a slow and steady ….and large way. As I crested a hill on Highway 290 I came upon an accident that had just occurred - someone had hit a deer in the road. Cars were all scattered and confused, trying to get out of the way, which is what I was doing when I saw what seemed like an apparition. The deer, a female, was trying to drag herself off the road. Her hip had been massively crushed. She was bleeding terribly. The sun was low in the late afternoon sky and the slanting light made her pooling blood glisten and shimmer like gelatin on the black pavement. The deer held her elegant head high as she moved with calm determination, and then, she stared straight at me, directly into my eyes. I was awestruck, then shaken, and suspicious - was this a sign, an omen? Was she trying to tell me something and what about my Dad? I continued on to Wimberley to find my father still among the living. When he did let go, a few days later, mine was one of the last voices he heard. He died in a funky hospice room but it was blessed with a large picture window which looked out onto twisted oaks and scrappy brush and I am charmed that one of his last views of this Earth was a little wild scene of Texas. But death makes everything seems inordinately potent. I saw that deer whenever I closed my eyes. I began to feel a kinship between us - the female deer and me. And thereafter, whenever I encountered a deer whether in their naturally wild habitat or mingling into my more civilized one I felt a shift in significance, an added weightiness, as if the deer were trying to communicate with me, warn me, or alert me to something about the fragility of my life or even of theirs. I gained sympathy for the deer and a heightened concern for the life of this earth.

Eventually, and thankfully, along with these morbid concerns came very good memories of joyful encounters with deer - like the many camping trips I enjoyed as a child with my family and friends. So that while this body of work is my response to very real fears of death and destruction it is also about the life affirming impulses of childhood wonder. My crankie illustration, for example, is about my memories of one of those camping trips when I was probably 8 years old. Often we would take a deer sighting drive at dusk. I road with my older sister, my best friend and her sister, and probably several more siblings, piled into the back of a red station wagon, driven by my friends’ dad. Exciting and magical - with the windows rolled down and our hair blowing in the hot Texas wind, the radio was playing something bubble gum pop. We were all on the lookout for deer in the wild, and the country highway we traveled, was just outside of Wimberley, Texas. This body of work is dedicated to my parents, both artists, who showed me that life is an art practice and filled my childhood with wonder.